The Native Indigenous Student Academy for Cinematic Arts is a program of Red Nation Celebration Institute amplifying emerging Native Indigenous student filmmakers. Each year, college, university and ages 10 though high school film students from all over the world compete for awards and cash grants, with films being judged in the following categories: Animation, Documentary, Live Action Narrative and Alternative/Experimental.

Other programs include RNCI Film Labs ‘Mentorship’ and ‘Screenwriters’

The Native Indigenous Student Academy of Cinematic Arts is an international student academy of excellence in film competition, first established in 1995 with the name Native Youth Matter – If I Can See It I Can Be It.  Since 1995, Native and Indigenous students have always been included in the submission process for RNCI program ‘Red Nation International Film Festival’ however in 2021, RNCI Board of Directors recognized that the students needed their own stand alone film festival and awards ceremony.

Something to Live for!

Our Mission is to actively engage with Native youth in making a connection that will have a life long positive effect on their lives. We are actively communicating with industry executives in staying in forefront of the entertainment industry to ensure our image is represented in film and television, in order to make a positive imprint of our image to native youth. Native youth do not see themselves in media, what does that say to to our youth, how does that effect them? Red Nation Celebration Institute’s program directly impacts native youth with positive images, positive roles models and through our Native Wellness Whole-being approach in developing leadership, in turn gives Native American Youth the confidence and skills in community, film, media, and activism.

Native Indigenous Student Academy for Cinematic Arts Education program reaches more than 5,000+ students and teachers, annually. Our programs strive to help students from kindergarten through college develop media literacy skills, cross-cultural awareness, and a lifelong appreciation of movies. In applying the power of film in empowering and directing the energy, vision and promise of American Indian & Indigenous Students, globally. 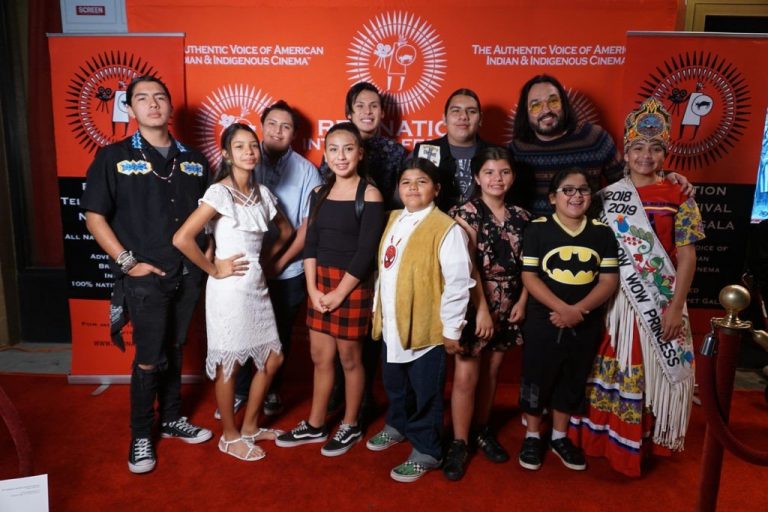 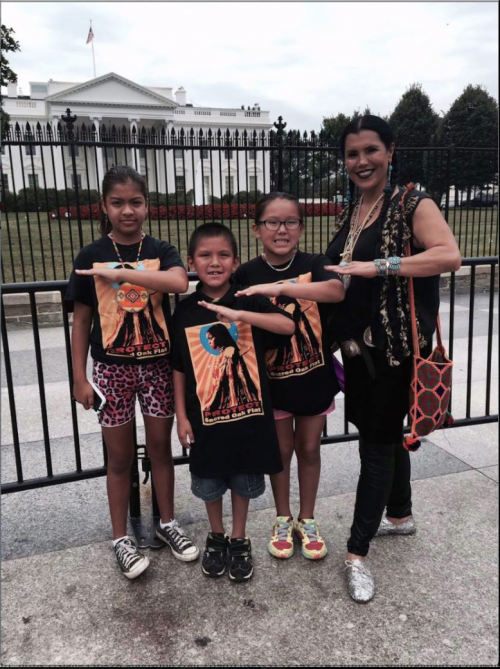 Native Youth Matter – If I Can See It I Can Be It is a native youth program of Red Nation Celebration Institute founded in 1995. Its a community of out-reach programs and initiatives that build strong and healthy relationships with Native Youth on Reservations and in Urban communities. Historical trama, youth suicides, sexual assault, missing & murdered youth in Native communities is higher than any other race. Red Nation Celebration Institute addresses these issues with Native youth in healing themselves through film, music, dance, sports and the arts, and international relations in Cultural Bridging. Its a prevention educational program designed to support Native youth in empowering them to tell their own stories.

Our Goal is to build on-site year round youth camps on reservations with a National Tour of accomplished native artists, during school session after Spring break each year to bring positive messages to native youth.

RELATED: Watch The Root Cause of Addiction: www.facebook.com

Native Indigenous Student Academy for Cinematic Arts Film Festival (formally known as  Native Youth Matter – If I Can See It I Can Be It) has screened over 300+ Native Youth Films over the last 27 years that have been directed, produced, written by native youth including the annual matinee screening of ABC/Hallmark “Dreamkeeper” the Myths & Legends of the American Indian. #NativeYouthMatter programs and initiatives have worked with Michael Jackson, to screening films, to Native Youth performing at Red Nation Celebration Institute’s Concert Series, to workshops at UNITY, to film contests, to Red is Green Carpets events, to busing in Native and Non-Native youth to Red Nation events, to donating $20,000 worth of school supplies, books, toys, bikes, computers to Pine Ridge and Rose Bud Reservation, to over a 3000 Red Nation T-Shirts to Native programs, to inviting and honoring Standing Rock Native Youth to the First Indigenous Women RISE Climate Change March, Nov 2015. 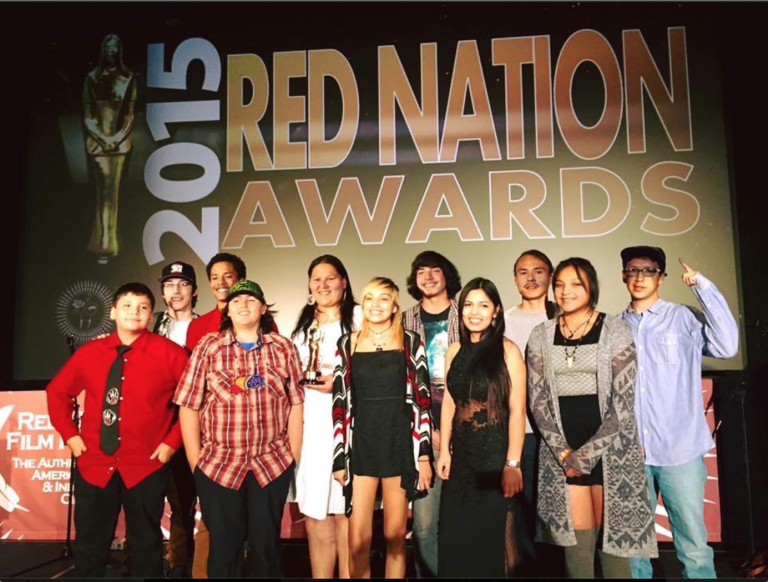 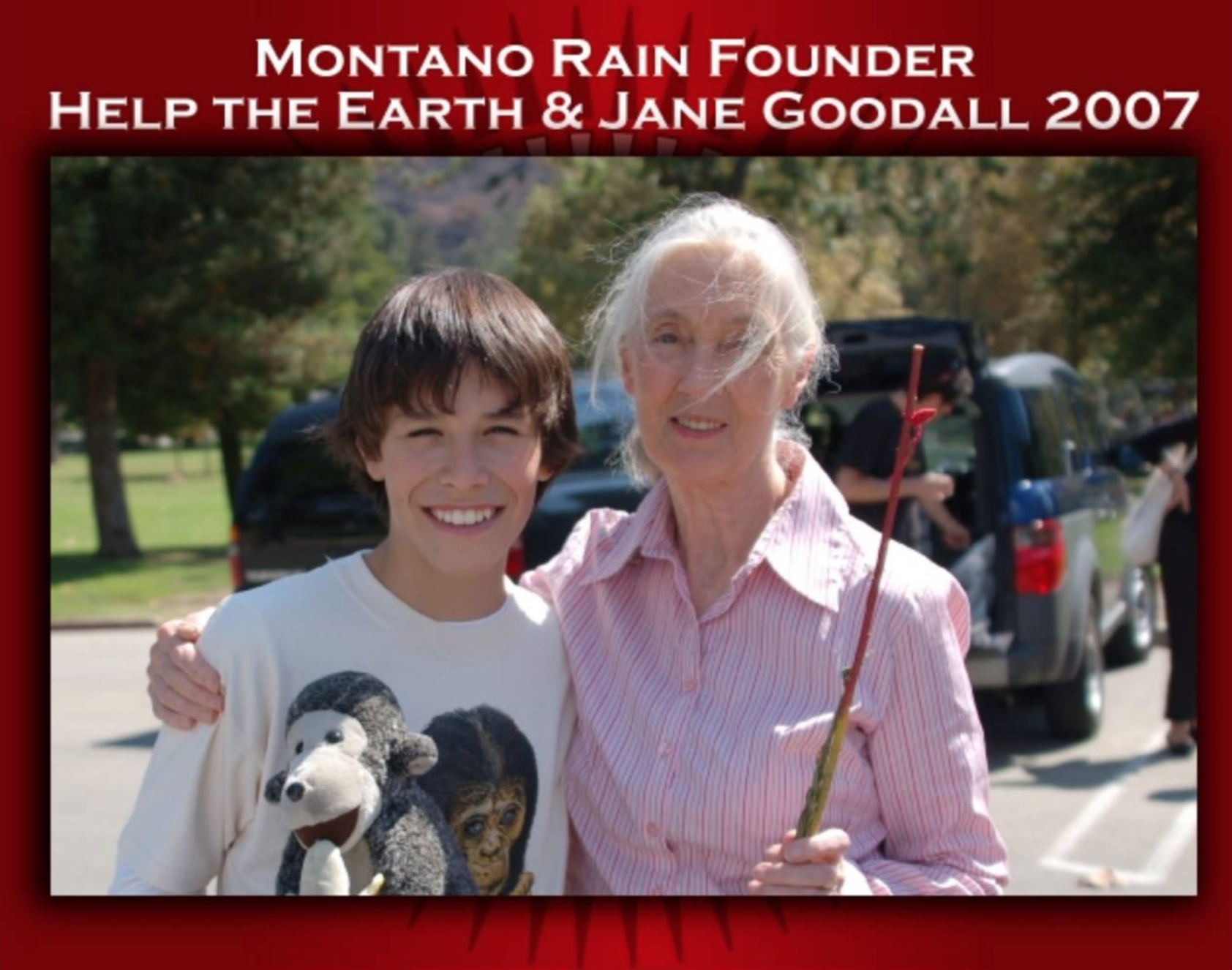 RNCI nurtured Help the Earth Founder Montano Rain Robinson in supporting his efforts at age 8 years old to launch his non-profit HELP THE EARTH. RNCI introduced Montano Rain to Dr. JANE GOODALL. She then invited him to Africa where he directed and produced his first film. He also sang Traditional Native songs for Dr. Jane Goodall’s peace concerts and her fundraisers for her organization The JANE GOODALL Institute.

Montano Rain launched the first ENVIRONMENTAL YOUTH SUMMIT in Los Angeles, he brought together 275 privileged and under-presented youth from all over the City of Angeles. Montano Rain was the first recipient of the United Nations YEA Award 2007.  He went on to laughed the first Environment Film Festival (2007 to 2010). Montano Rain graduated from Berkeley College of Music in 2018.

RNCI have bused in students from San Pedro and downtown LA schools for our cultural bridging screenings to environmental projects and first and only American Indian Parade (DYLA), produced by RNCI. 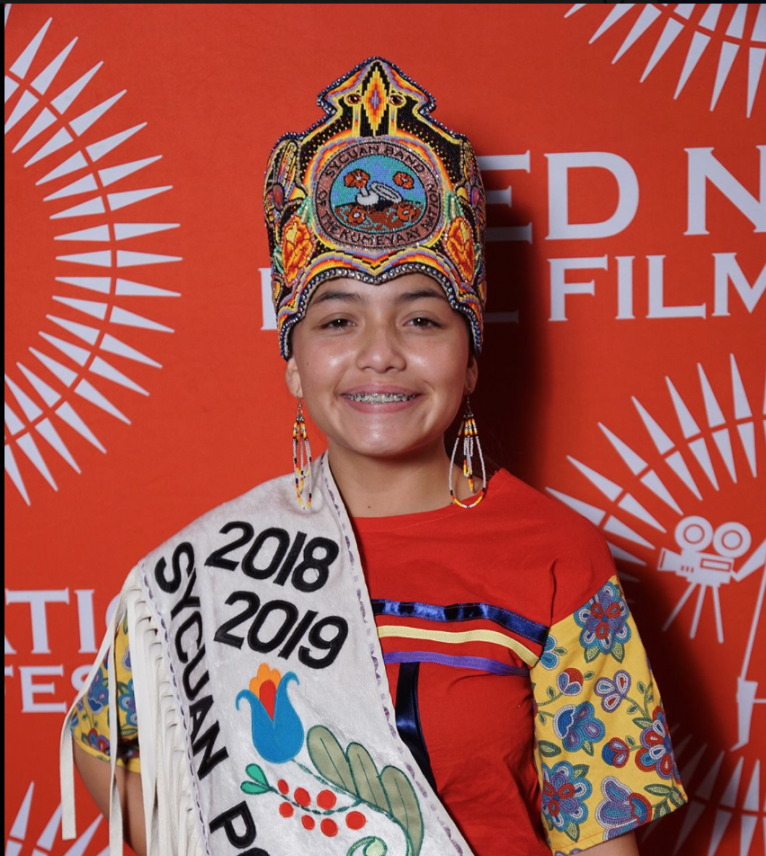 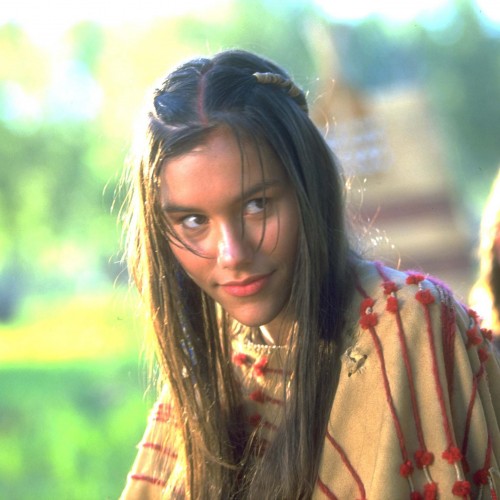 An annual film program ‘Cultural Bridging’ screenings, where students are bused in to experience this film ‘Dreamkeeper’ and learn first hand from other Native actors, filmmakers and students.

Joanelle Romero founder of Red Nation Celebration Institute (RNCI) was instrumental in bringing in all the Native dancers and negotiated a ground-breaking deal, music video in where all the Native dancers received $3000 each. Black or White was the first music video that included Native traditional Powwow dancers. Michael Jackson supported Joanelle Romero’s efforts in Entertainment Weekly. 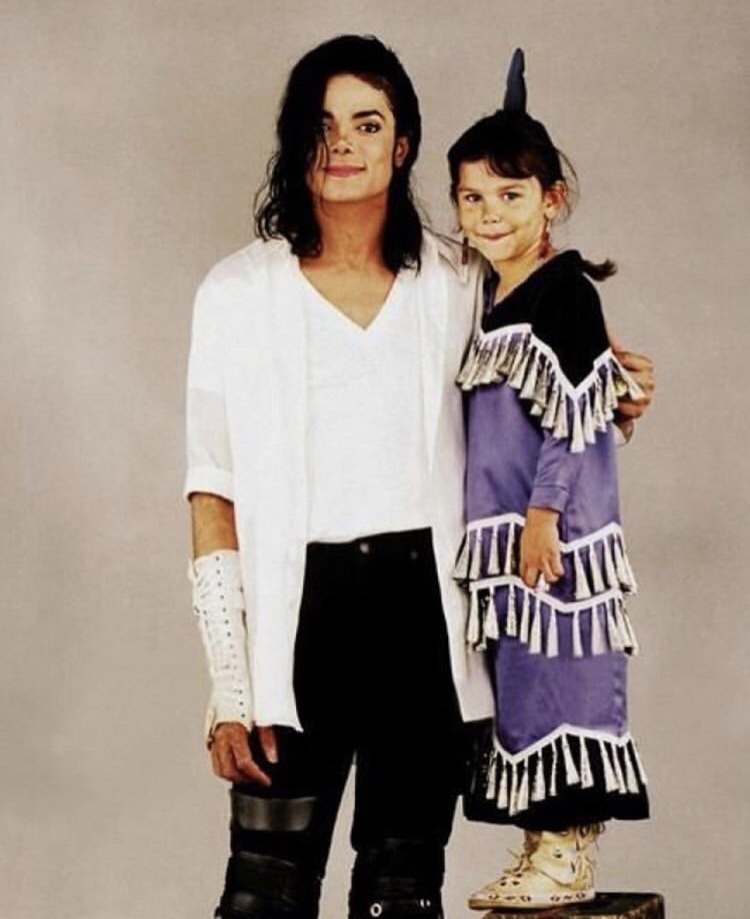 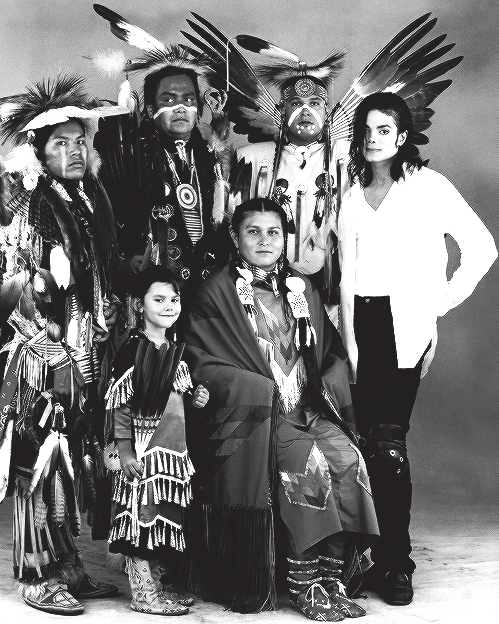 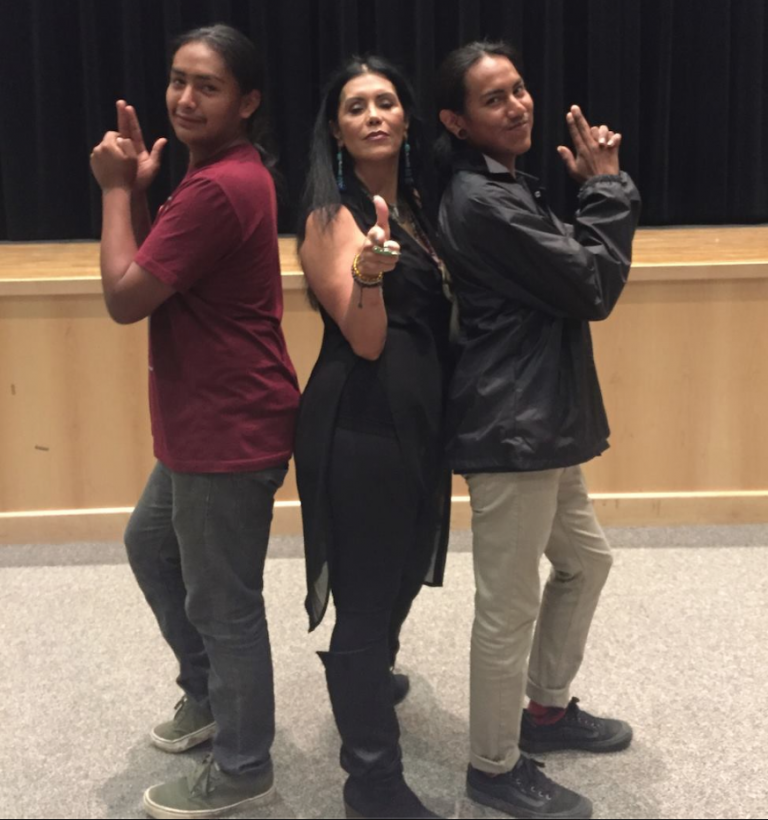 RNCI ‘Native Youth Matter’ program has traveled to Navajo Nation to speak with their youth through the ‘Stars in the Desert’, to Rosebud South Dakota and Santa Fe NM included all 19 pueblos, where their youth were bused in to experience Native recording artists and actors at the annual Red Nation Celebration Institute ‘Concert Series.’

Support for the Native Indigenous Student Academy of Cinematic Arts

Native Indigenous Student Academy of Cinematic Arts is made possible through gifts, grants and sponsorships.

Give your support to Native Indigenous Student Academy of Cinematic Arts program.

The Red Nation Celebration Institute Programs focus on the specific development of storytellers from Native and Indigenous backgrounds, encompassing feature film and episodic work. Fellows will receive hands-on support from the Institute and advisors, including one-on-one feedback sessions and roundtable discussions.

A look inside our Creative Program Labs and Intensives