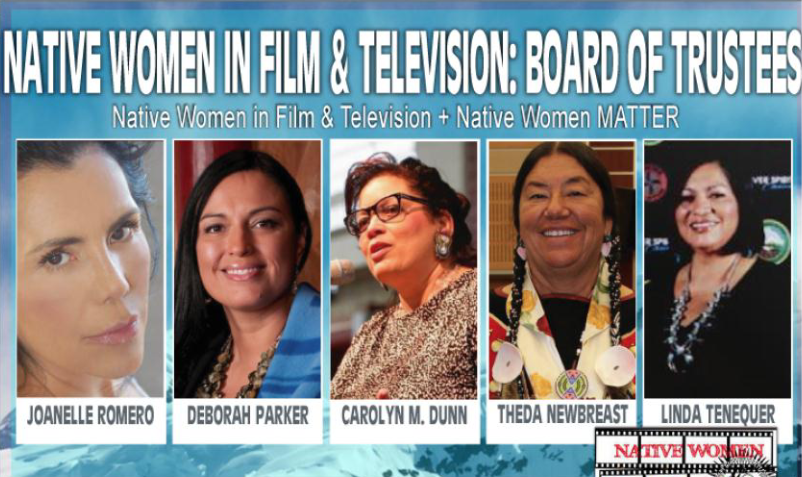 Native Women in Film & Television (NWFILMTV) has formed a Board of Trustees to help the film industry address situations like R6.

When a group of American Indian actors walked off the set of an Adam Sandler movie last week, Native Women in Film & Television decided it’s time for a Call to Action!

At this point it’s not about who walked off the set and who stayed-it’s about the script and the effect it will have on our Indigenous people, Native youth and Native women.

Award-winning director, producer, actress and festival founder, Joanelle Romero (Apache/Cheyenne Nations/Sephardic Jew), founder of Native Women in Film & Television, formed the group to address situations regarding these kinds of issues within the film industry. Romero’s mother Rita Rogers (Apache actress) costarred in “The Magnificent Seven Ride”, the last of four features from the saga “The Magnificent Seven”. Adam Sandler’s “The Ridiculous Six” is a satire based on “The Magnificent Seven”.”

Adam Sandler’s R6 movie depicting a Native American woman urinating while smoking a peace pipe is ‘unholy,’ it’s like if we were to make a film and place the Torah on the ground and pee on it” stated Romero, “It’s an act of ‘desecration,”as I am a sun dancer and the Chanupa is a sacred pipe that we pray with, it’s a sacred way of life for our people”. Among many Native traditionalists, pipe bowls with stems were, and continue to be a tool used for prayer, a way to communicate with the Creator.

Traditionalists believe that when the pipe bowl and stem are joined, the pipe becomes “active” and ready for use within a ceremonial context.”Native American women in the United States are suffering at astonishing rates of domestic and sexual violence -violence which is further displayed throughout television and film. Demeaning portrayals of Native American women further diminish the cultural and historical importance of Native women in today’s society. Further marginalization is exactly what we do not need in film and television. This next generation is looking for hope and inspiration and not sexual degradation of their sisters, mothers and grandmothers” -Deborah Parker (Tulalip/Yaqui) Board of Trustee, Native Women in Film & Television, former Vice Chairwoman of the Tulalip Tribes, Award Winner, Educator and Social Activist.

There is another scene in R6 that has white actors pouring alcohol on a native woman who by the way is played by a non-native actress, this promotes violence against women.

“The objectification of Native women as sexual subjects is a form of cultural and social genocide that still exists today. The demeaning of Native women is an ongoing violence against us that not only is immoral but illegal under the provisions of Violence Against Women Act (VAWA) This needs to be addressed as not only a human rights issue, but as an act that violates federal legislation, which is a prosecutable offense” -Carolyn M. Dunn, PhD, Board of Trustee, Native Women in Film & Television, Poet, Playwright, Associate Vice President, Office for Institutional Diversity, Central Michigan University.

The character names in R6, “Beaver’s Breath” and “Wears No Bra” and “Sits-on-Face” will promote bullying in schools and young Native girls will be the target. This is yet another way of violence against Native girls.

Other issues in the script, non-natives playing natives, and this film is supposed to be of Apache Nations; however the only thing Apache in this film, that has been released to the press, is the wardrobe.

“R6 had a great opportunity to make a funny movie, but chose the short sighted direction which has resulted in racial prejudice that can lead to violence against young girls and women. The best way to have done this would have been to use a native production company to help with the writing of the script. By stating that a disclaimer will be at end of the film, well who stays until end of a movie, not the general public! This is not good enough and not a solution” -Native Women in Film & Television Board of Trustees.

In the United States there are 5.2 Million American Indian and Alaskan natives, however in the world and in this country, when you include Indigenous Nations; we have the highest number of any minority group.

Ms. Deborah Parker was a leading force in getting the bill passed for the Violence Against Women Act. President Obama signed the Violence Against Women Act into law March 2013. Deborah Parker (Tulalip/Yaqui) Board of Trustee, Native Women in Film & Television, former Vice Chairwoman of the Tulalip Tribes, Award Winner, Educator and Social Activist.

In regards to network television, there is only one native guy who sits on all network meetings annually, he is not a producer, director, leading actor, however he was an extra in films several years ago and has been a consultant on some films. This needs to change.

Stereotypes harm Native women who have the highest rates of rape and murder in the country –3 and 1/2 times that of other American women.

More than 70% of the assaults against Native women were committed by White men according the Dept. of Justice and one out of three Native women will report having been raped. These stereotypes cause real harm in our lives.

Additionally, major Hollywood film productions that use Native people as consultants instead of developing meaningful partnerships are a subject worthy of examination. A partner relationship would benefit both parties.

Native people have a story to tell -their own. And there are plenty of Native people in the field that would qualify as true partners.

Joanelle Romero is also the founder of Red Nation Film Festival, Red Nation Television Channel, Native Women in Film & Television, Red Nation Films, The Romero Company An Indigenous Film Studio and American Indian Heritage Month in the City of Los Angeles. Ms. Romero has a long and impressive career as an actor, starring in the first Contemporary American Indian Women’s Story ever producer in 1977 “A Girl Called Hatter Fox” to 1989 Sundance award winning film and cult classic Pow Wow Highway, a film that paved the way for contemporary native filmmaking. As a filmmaker Romero’s film AMERICAN HOLOCAUST: WHEN ITS ALL OVER I’LL STILL BE INDIAN made the Academy’s Documentary Branch shortlist in a preliminary round of voting in 2000.

Ms. Romero has been a SAG-AFTRA member since 1977 and is the longest standing American Indian member in the union. She sat on the SAG-EEOC committee from 1998 to 2001 and for many years was the only American Indian representing the native voice to the union. At SAG-AFTRA she produced numerous events including the panels “Where Are We (NativeAmericans) in Film, Television and Radio” (2000) and “Native Women in Film & Television”(2012).