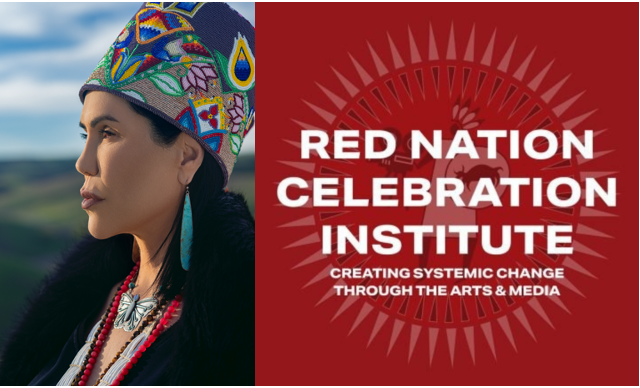 Until the Academy of Motion Picture Arts and Sciences (AMPAS) announced that it would apologize to Sacheen Littlefeather the only recognition she received for her courage to speak truth to power regarding forty-eight years of systemic racism within the entertainment industry was ‘The Brando Award’ in 2019 at RNC Red Nations Awards, founded by Joanelle Romero.

“As an Indian woman you wish to be alive when something like this happens to you. To read this apology from the Academy of Motion Picture Arts & Sciences and be heard while I am alive, I am grateful,” says Sacheen Littlefeather.

“I remember what a blessing and an honor it was back in 2019 to represent The Brando Award along with Rebecca Brando and the late Joanne Shenandoah,” Joanelle says. “Sacheen is a sister and friend to so many, but to me personally she is family. Our Apache relations are proud of her bravery and courageous heart in speaking truth to power that night in 1973.”

“I am much better at refusing awards then I am accepting them,” Sacheen said while accepting The Brando Award in 2019 on her 73rd birthday.

“Being a member of the Academy I know first-hand how it operates. Today AMPAS non-profit organization still has much work to do in regards to accountability with representation for Native and Indigenous talent,” Joanelle points out.

In 2016 Joanelle was the first Native female to be invited to join the Academy of Motion Picture Arts & Sciences.

Not once in all the press releases from AMPAS has it mentioned the RNCI Awards to Sacheen or the fact that this apology would not have happened if not for RNCI, Film festival and Awards and that fact a film was made on her life story.

In 2016 AMPAS placed Joanelle under the Associate branch which cannot vote or be on committees.

“In 2022, I met with new executives of AMPAS and they stated they would reach out to Heather Rae since she is on the Academy’s Inclusion Advisory Committee and in producers branch however this was a broken promise and they have never returned my calls, they also stated they would have me come in and meet with Actors branch chairs and Member-at-large,” Joanelle says. “Nothing has happened since those conversations in early 2022. Even though I have emailed and left calls asking what’s happening.”

In 1977, Joanelle was cast in her first lead role, The Girl Called Hatter Fox (1977). It was the first time a Native actress carried a leading role in a contemporary film. Then she was cast in the film that changed the Native narrative in Hollywood George Harrison’s Powwow Highway (1989), to being the first Native filmmaker short-listed for an Academy Award for her film ‘American Holocaust: When It’s All Over I’ll Still be Indian’ in 2000.

Joanelle is part of a family legacy in the entertainment industry. Her mother Rita Rogers, Mescalero-Chiricahua Apache and Spanish-Sephardic, was signed to Universal Studios in the 1960’s. She was featured in nine Elvis Presley movies, the Carol Burnett Show, and the Red Skelton Show.